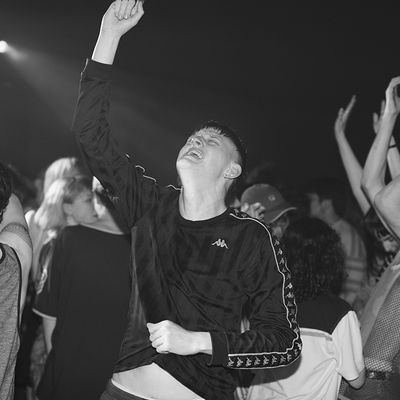 Films about raves and clubbing aren't new - Trainspotting, Human Traffic and BPM have brought this world to life in various ways over the years; but Beats takes a smaller, more intimate approach to capturing the intensity of a 90s techno rave.

A mix of nostalgic and edgy, Beats screened at the 2019 NZIFF and is more than a celebration of youth culture and the rave scene, it's also a buddy flick and coming-of-age story.

Fifteen-year old Johno (Cristian Ortega) is a timid young man with a part-time job stacking shelves at the local supermarket. His best mate is the slightly unhinged and streetwise Spanner (Lorn Macdonald), the kind of kid your mother would prefer you didn't bring home.

Neither boy is happy with life and they're both eager to venture into the rave world. Their timing isn't great. It's 1994, which is the year the British Government announced the Criminal Justice and Public Order Bill, which outlawed unlicensed gatherings at which amplified music is played that has a succession of repetitive beats. Yes, seriously.

With a massive protest dance party planned on the outskirts of Glasgow, Johno and Spanner are determined to be part of it. It may be their only chance to attend one, and with Johno about to move to a nicer part of Glasgow with his mother and new boyfriend (a policeman whose job it is to close down illegal raves) they both know their friendship is coming to an end.

Ortega and Macdonald are relatively new faces and convincingly portray a genuine friendship, and while Ortega overdoes his "bewildered" look he reveals there's much more to Johno over time.

But that's all they needed to do. Filmed in black and white, with a smattering of colour when we get to the rave scenes as the party's projected imagery fills the whole screen, it's a clever approach that immerses the audience. Director Brian Welsh's also added to the authenticity by organising an actual rave and shooting around it rather than using the old-school method of actors pretend-dancing so dialogue can be recorded.

Beats doesn't have anything more to say than previous films about dance culture, but with a visual style of its own and excellent music choices, it's a fitting tribute to an era etched in the memory of anyone old enough to have attended.