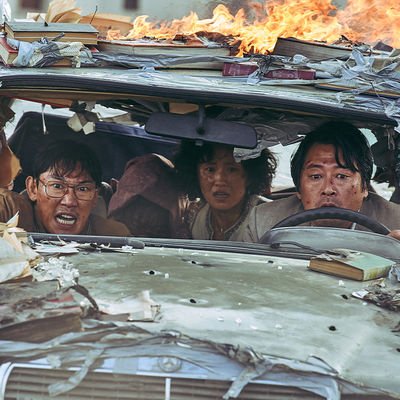 In Somalia in 1991, diplomats from several countries were caught in a terrifying civil war as Mogadishu erupted into chaos and mayhem. Those who saw Ridley Scott’s Black Hawk Down from 2001 could not easily forget the sense of dread that dominated that film.

Thirty years after the actual events, we have a South Korean blockbuster version that’s full of surprises. First, that its re-creation of the war zone is so accomplished. Ryoo Seung-wan, an action veteran, does a superb job recreating Mogadishu in Morocco. The scale is lavish, as if money was no object.

Second, that the film remains character-driven, despite the quality and ferocity of the action. Third, its genre elements are so skilfully blended, keeping us guessing as it moves from wry comedy to full-tilt violence and high drama near the end. Getting the tonal balance right is tough on a movie of this scale.

It’s based on a book by the man who was South Korean ambassador in Mogadishu in 1991. North and South Korean diplomats were competing all over Africa at the time for the votes that would determine whether South Korea could join the UN.

Ambassador Han is played by big star Kim Yoon-seok with deadpan aplomb. He only has six staff in the embassy and two of them hate each other. The hot-tempered intelligence officer Kang (played by Zo In-sung) finds the administrator Gong (Jeong Man-sik) to be a waste of space.

The publicity uses words like “true events”; but stops short of saying it’s a true story. If both sets of staff did put aside their differences for the escape, it’s a remarkable tale – but I cannot say. I can say that it works superbly as an allegory of the Korean tragedy, and the price Koreans still pay in their daily lives for the great divide.

I can also say I haven’t seen a finer action finale for a very long time. Ryoo’s work with vehicles, violence and speed is of Mad Max quality: top-notch stunts and foot to the floor action. The fact the action is never without strong emotion makes it quite irresistible. The film ought to have a seat belt warning.

Escape from Mogasishu is now playing in Australian cinemas, and opens in New Zealand cinemas 28 April!