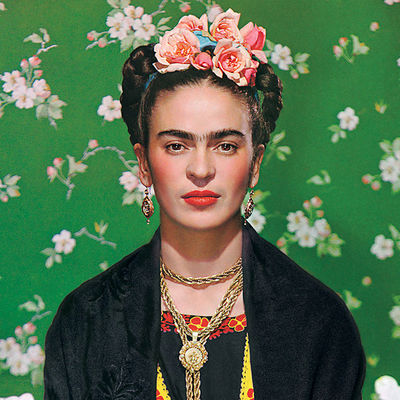 "I've been thinking a lot," said a friend of mine, over a laksa, in an alleyway off Wellington's Cuba Street, "about the way our future affects our past."

And now I'm thinking about that line too. And wondering if maybe the life and post-life of Frida Kahlo is a perfect example of what my friend maybe meant.

Kahlo was born in 1907, in the Coyoacán – "the place of coyotes" – municipality of Mexico City. She was a promising student, one of four daughters, with an ambition to study medicine and be a doctor.

She endured polio as a child, but it was a bus crash, when Kahlo was 18 years old, that changed her life's trajectory forever. A metal handrail impaled Kahlo through her abdomen, breaking her pelvis and ruining her lower back. She would endure crippling pain for the rest of her life.

Confined to bed for months, Kahlo learned to paint by studying her own reflection in a mirror suspended above her.

Her fertile, frustrated and febrile intellect projected metaphor and fable onto those early canvases, which are now regarded as early masterpieces of near-surrealism (Kahlo herself rejected the term, calling it petit-bourgeois – at best).

She was courted by Diego Rivera – then the greatest muralist and one of the most famous artists in Mexico, with a reputation that had spread into North America – and married him in 1929. Rivera was a huge man, while Kahlo was small and – outwardly – fragile.

They became known to the public and press as "the elephant and the dove".

Against a tragic and tumultuous backdrop of miscarriages, affairs (her's and his), separations and reconciliations, Kahlo continued to work, producing paintings that deployed mythological and religious references, great wit, lacerating insight and Kahlo's deep respect and understanding for Mexico's history and people.

When she died in 1954, at the age of 47, Kahlo was a respected and successful artist. She was the first Mexican artist to have work purchased by the Louvre – and had exhibited extensively in North America and Europe. But nothing of her reputation during her life really hinted at the acclaim that would follow.

Kahlo's work and – especially – her life-story were re-evaluated in the 1970s and '80s. Her unrelenting work in the face of pain and cruelty were a revelation and an inspiration to a generation of women from around the world – and also to the renaissance of Mexican nationalism.

Kahlo became the perfect screen on which to project any human aspiration to get out from under oppression. The fact that she was also a wonderful painter, whose modernist ideas were under-appreciated in her lifetime, completed a perfect storm of posthumous deification.

Frida: Viva La Vida is the story of all this and more. Director Giovanni Troilo and his narrator Asia Argento throw the kitchen sink at their film, bringing in a superficial "there were two Fridas" trope early and then running with it.

Too often Kahlo the woman gets lost beneath the mythologising and a tired recounting of the more sensational moments in her heroically varied sex life.

But, as always, it is Kahlo who triumphs, as the sheer volume and power of her symbolic presence in the world of today alters, but somehow elevates, the facts of her actual life.

Kahlo's future truly did change her past. That's the power of celebrity, actually earned.

Go see Frida: Viva La Vida. There is a lot not to love about the film, but you would be a bloody fool to not love the life.