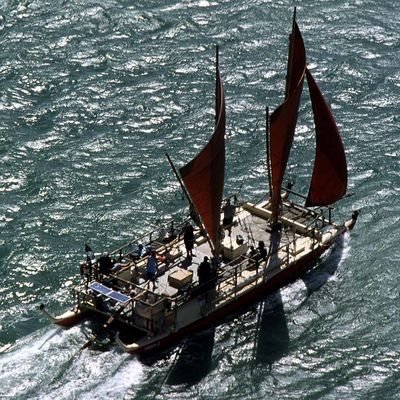 If you look at James Cook's first map of New Zealand, from the voyage of 1769 and 1770, you might not immediately notice one of the most remarkable things about it.

I've known since primary school that Cook made Bank's Peninsula into an island and Stewart Island into a peninsula. But strangely, none of my teachers ever mentioned that Cook doesn't use the names “North Island” and “South Island” on that map.

Nope, if you look closely, you will see he wrote “Ta Vai Poe Nammoo” and “Eahei No Mauwe”. Today, Te Wai Pounamu (the waters of Greenstone) and Te Ika a Māui (Maui's Fish) are well known as the wildly beautiful original names of the two islands. But how did James Cook know that?

The answer, is that he was told the names by his navigator, Tupaia, who Cook had taken aboard in Tahiti and who played a major part in the voyage's success. Tupaia drew charts of the oceans and stars, knew exactly how to reach New Zealand, translated and mediated – and quite probably saved crew members lives a couple of times.

In a better world than this, Tupaia would be as well known to us as Cook or Banks – and there would be statues of him across the country. And, one day, there will be.

But until then, we can at least honour the life of Sir Hekenukumai Ngāiwi Puhipi – or Sir “Hek” Busby – who was maybe the greatest ever exponent, of a tradition of navigation and boat-building that stretches back to Tupaia and beyond.

Sir Hek Busby was from a Pakeha and Māori (Te Rarawa and Ngāti Kahu) family. By trade, he was – literally – a bridge builder. He and his teams designed and built 200 road and rail bridges all over Northland, before Hek retired, at the age of 50, to pursue his real passion.

Hek's skill as an engineer and his profound curiosity led to him finding Nainoa Thompson from Hawaii and Papa Mau Piailug, a Micronesian navigator from Satawal. And it was these men who reassembled the knowledge of how to build ocean-going waka, using only the traditional methods.

Whetū Mārama: Bright Star is a terrific, timely and absolutely engrossing portrait of Hek's life and work. The film weaves together footage from the incredible journeys Hek and his crews undertook across the Pacific. Eventually, Hek led the construction of more than 20 waka, one of which, Te Aurere, sailed more than 55,000 kilometres, on journeys that linked all the nations of the Pacific, just as his ancestors had done.

Film-makers Aileen O'Sullivan and Toby Mills have achieved something very special here. Whetū Mārama has been more than 15 years in the making – the film is a journey of its own. Faces age and children grow within it – and it has emerged as a sturdy, many-layered and multi-faceted narrative. There are connections here and strands being woven that are not immediately apparent, but will resonate with you long after the lights come up. I think this is a film that will be shown and wondered over for years.

With Matariki still visible in the morning sky, I can't think of a better time to learn more about, and to celebrate the navigators and explorers – Pakeha and Pasifika – who made this incredible country what it is today. Sir Hek Busby is a part of that tradition – and this film will be a wonderful, welcoming place to start a journey of your own.