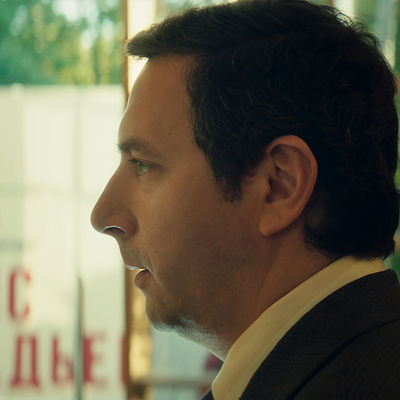 The complexities of life as a popular stand-up in the mid-1980s Soviet Russia are examined in this uniquely disconcerting film.

Aleksey Agranovich, who looks like the midpoint between Rowan Atkinson and Sex Education star Asa Butterfield, plays Boris Arkadiev, a failed novelist who has found wide success as a stand-up comedian.

His popularity is supported by the State, but he must get all his material approved before it is performed. That contradiction becomes increasingly pertinent as we follow Arkadiev through a particularly tumultuous week.

At a Latvian dinner party that illuminates the "advantages" of being part of the creative elite in the USSR, Arkadiev is accused of being a sell-out by his old writing partner. He dismisses the attack, but his self-loathing is evident. Not immune to ego, Arkadiev gets his revenge by leaving with his former creative collaborator's girlfriend.

Back home in Moscow with his wife and two children (including a rebellious teenage son), we begin to understand the obligations that come with being famous under Soviet rule when Arkadiev is whisked away by KGB in the middle of the night. The scene plays out in terror, but it turns out the authorities just want Arkadiev to perform via radio for a cosmonaut floating above the earth.

Later, he attends a bizarre birthday dinner for the wife of a high-ranking KGB officer. For all of Arkadiev's talent and fame, he is far from in control of his own expression and yearns to poke the bear, as it were. When his frustration inevitably bubbles over, in a bathhouse of all places, the precarity of his position is fully illustrated.

Agranovich has an impish presence that conveys his character's comedic talent while allowing his inner torment to shine through. Although the drab Soviet aesthetic embodies Arkadiev's all-encompassing soullessness, the film remains visually interesting.

The Humorist is an uneasy, but never less than fascinating, viewing experience.