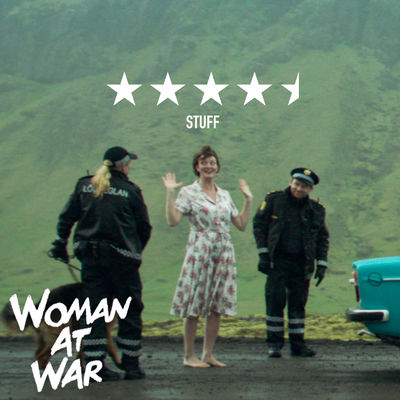 I've been waiting to write this review for more than half-a-year now, ever since I first saw Woman at War at a packed-out Embassy Theatre screening at the New Zealand International Film Festival in 2018.

Waiting, because sometimes – and this is why film festivals exist – you'll stumble across a film so rhapsodic in its own uniqueness, so unbothered by what conventional storytelling would expect, that you just can't wait to share it with your friends.

Here's Halla. She is 49 years old, gets around in a selection of stylish and very comfortable looking jumpers, teaches choir, practises yoga and rides her bicycle everywhere.

Halla is just about the last person anyone would suspect of being "the mountain woman"; the feared and famed eco-warrior – or "economic terrorist" to the media – who has been destroying electricity pylons across the Icelandic highlands.

Halla is determined to stop an aluminium plant from operating in her country. If she can disrupt their power supply for good, then they might just pack up and go somewhere else. To achieve this, Halla has perfected the diabolically dangerous art of using a bow to fire steel cables across the live high-tension lines. Hunting her down on her quest are the forces of government, with their helicopters, drones and dogs.

As Halla, Halldóra Geirharðsdóttir (Metalhead) hands us a sly and hugely generous performance. It is simply impossible not to like and admire this woman, even as an action from her recent past pushes Halla to make an almost-impossible choice.

Woman at War is an absolute peach of a film. It is the best melding of comedy and thriller I have seen in years. This is a warm, witty, wise and absolutely endearing oddity of a film I will always remember fondly and recommend to anyone who appreciates a bit of quirk and character in their movies.

Though it sometimes felt reminiscent of an Aki Kaurismäki or a Roy Andersson piece, Woman at War reminds us that some of the very best films are the ones that struck off defiantly in their own direction, written, directed and performed not to remind us of some other movie we might once have seen (or funded), but to make a whole new mark of their own. Bravo.