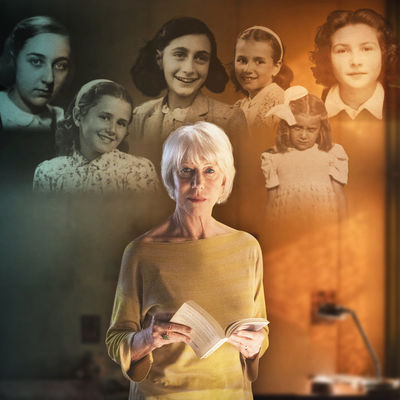 Anne Frank was born in 1929 into a German Jewish family.

When Anne was four, her family moved to the Netherlands. The Nazis poured into Amsterdam in 1940 and, by 1942, the persecution of Jews and other "undesirables" had become so deadly that Anne's family were taken in by her father's employees, who converted a hidden area in their workplace into a space that could house eight people in crowded, but survivable conditions.

In the two years she lived in those rooms, Anne kept a diary.

In 1944, the family were betrayed. Anne, with her parents and sister, was transported by train to Auschwitz. Later that year, Anne, her sister and mother were taken to the Bergen-Belsen concentration camp. Anne died in the camp in early 1945, probably of typhoid.

When the war ended in 1945, Anne's father Otto was the only surviving member of the family. He returned to Amsterdam and was there given his daughter's diary, which had been found after the family were taken. Otto was astonished at the power and maturity of the writing. In 1947 – to honour Anne's often stated wish to be an author or a journalist – he had it published. Today, The Diary of Anne Frank has been translated into more than sixty languages and has sold over 30 million copies. It has been quoted by Nelson Mandela, adapted for stage and screen and is regarded as one of the most important books of the 20th century.

If Anne Frank had lived, she would have turned 90 this year. Which is as good a reason as any to make a film that introduces Anne to a new generation.

And that is what #AnneFrank: Parallel Stories is: Anne re-evaluated and told again, for a decade that maybe needs to revisit her story more than we might care to admit.

Italian film-makers Sabina Fedeli and Anna Migotto have taken the known facts of Anne's life and set them against the stories of five other Jewish women, all in their 90s now, all of whom survived the Holocaust. One of them even met Anne. Their stories are a moving reminder of a generation that was all but destroyed by hatred.

Holding the narratives together is Helen Mirren, reading – beautifully – from Anne's diary and also providing an unobtrusive, but perfectly calibrated narration.

What stayed with me, over a coffee after the screening, was the sheer stupidity and reductivity of the nationalist's and fascist's beliefs. Their fear of "the other" and their cowardice in the face of diversity cost the world a generation of thinkers, writers, inventors, scientists, artists and musicians whose works and achievements we will never get to share.

Parallel Stories gently, persuasively and deliberately reminds us that, in our own way, we perpetuate this insanity today with our refugee camps, our borders and walls and all the other toxicity we bring to the world when we choose to believe that any person is fundamentally different to ourselves.

I walked into #AnneFrank: Parallel Stories wondering whether her story needed to be retold. I left, convinced and furious that of course it still does. Go and see this film. And take your kids.