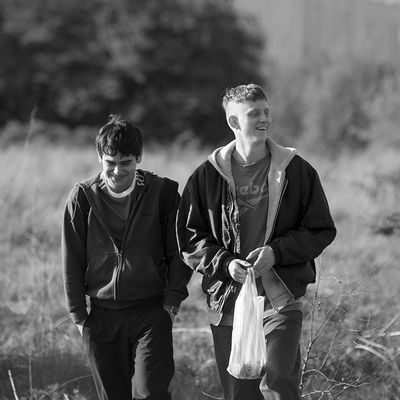 Beats is about brotherhood between two best friends but also among an entire culture. Directed by Brian Welsh, and co-written by him and Kieran Hurley (adapted from the latter’s play), it introduces 15-year-old Johnno (Cristian Ortega) and his downtrodden, unhinged pal Spanner (Lorn Macdonald ). With Spanner’s life about to crush him, their plan to have the night of their life at an illegal warehouse rave is a literal as well as mental escape. On a more macro level, the fun-hating Criminal Justice Act is about to crush the whole scene.

While never deviating from its brilliant young stars, Beats is a tribute to the rave revolution, communicating via its emotion, sounds and a hefty whack of psychedelic visuals exactly what it felt like. It’s miraculously authentic – the pill-popping centrepiece is the heavenly answer to the LSD hell of Gaspar Noé’s Climax. But it’s all about the people. Bar a needless eleventh-hour plot contrivance, Beats hits all the right notes: an ode not just to human gatherings but to youth itself. It’s absolutely a period piece (heightened by being in black and white), but its humanity is ageless, serving up an irresistible amount of thrills, spills and jaw-aches.