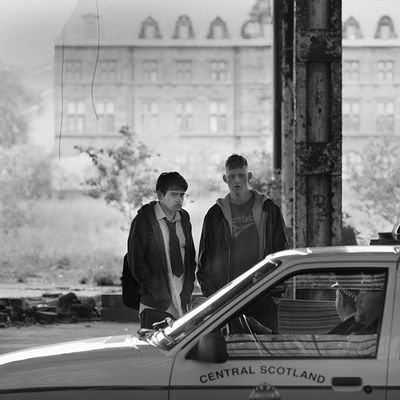 The ecstasy of friendship and, well, ecstasy are celebrated in Brian Welsh’s freewheeling coming-of-age film Beats, which vividly transports us to a rundown council estate in West Lothian in 1994, where the UK’s illegal rave scene is burnt down to the filter and under attack from the Tory government’s Criminal Justice Bill that outlaws parties where the music is “predominantly characterised by the emission of a succession of repetitive beats”. Our entry into this world, based on Kieran Hurley’s celebrated 2012 stage show, are two chalk and cheese best pals, 15-year-olds Johnno (Cristian Ortega) and Spanner (Lorne Macdonald).

The former is a low-wattage worrier with an upwardly mobile family and a part time gig shelf-stacking down the local supermarket. The latter – a loudmouth livewire with a sensitive side and a heinous haircut – lives with his sadistic, drug-dealing older brother, whose idea of fraternal love is holding his younger sibling’s forehead to a white-hot hob ring. The boys probably shouldn’t be friends (Johnno’s mother and her police officer boyfriend think Spanner’s “scum”) but a love of techno music, and more importantly a love for each other, has overcome their class differences. But with Johnno’s family upgrading to a fancy new build in a posher suburb, both lads know their friendship is going the same way as the rave scene.

One final blowout is required before Johnno's move. Spanner gets wind of an upcoming secret party organised by a pirate radio station and nihilistically nicks a stash of cash from his psycho brother so that he and his pal can escape for a night of debauchery. Johnno’s less keen, but a flirtation with a older girl who’s part of the rave scene, and the firebrand politics of the station’s Jean-Jacques Rousseau-quoting DJ, warms him to the idea of rebelling for once.

Cinema is littered with films about that one big night that changes you and your friendship forever, but in the hands of director Brian Welsh (best known for The Entire History of You, still the finest Black Mirror episode), the shopworn premise has plenty of bounce. He likes to skip from nervy crash zooms to slow-mo vignettes, as if the film itself is mirroring the contrasting energies of its two protagonists. Benjamin Kracun’s crisp black-and-white cinematography, meanwhile, both evokes the past and lends Johnno and Spanner’s journey a timeless quality. It also provides a hint of French New Wave-esque arty cool that’s kept firmly down to earth by Hurley’s rambunctious comic dialogue.

Beats is at its most thrilling when, like the boys, it breaks free of its grim reality and embraces the hallucinatory. During an extended impressionistic montage the film leaves the adventures of its trackie-wearing heroes for a few minutes to soak up the delirious communal experience of the rave. As the kids in this abandoned warehouse lose themselves to drugs and music for a moment of euphoria away from their shitty towns and home lives, colour starts to bleed into the frame. A psychedelic dance of light that’s part 2001's Star Gate sequence, part brain scan is cut in with images of crumbling industry (including the demolishing of Ravenscraig steel works), which all dissolves with images of the blissed out ravers as the music (hand-selected by Optimo legend JD Twitch) ratchets up. The scene is intoxicating, but we sense the comedown is around the corner.

Haunting the edges of Beats’ frame is the spectre of Tony Blair. It may be John Major’s government that’s waging all out war with Scotland’s youth culture, but it’s the shiney false promises of New Labour that really stings. Like American Graffiti, a film Beats evokes in its structure and its bittersweet flavour, we end with some where-are-they-now credits. While not quite as devastating as Lucas’ film’s coda, it’s clear one of these kids will be left behind in New Labour’s aspirational new dawn.