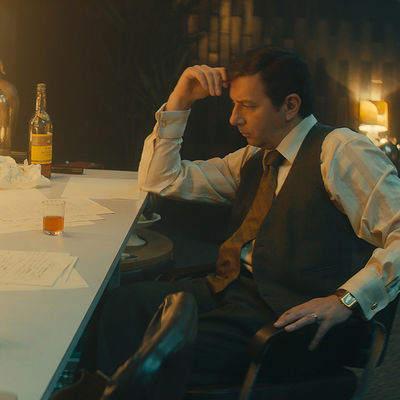 The year is 1984 – of course – and in Soviet Russia, the most famous and beloved stand-up comic of them all is Boris Arkadyev.

Boris is hitting middle-age like a beetle hits a windscreen. His material is stale, but still wildly popular with the audiences on the state-sanctioned theatre circuit. Every new routine he writes must be cleared by the censor before he can perform it.

At home, in between bouts of drinking and unfaithfulness, Boris' marriage to the super-humanly patient and long-suffering Elvira seems solid enough, but only because Elvira chooses to ignore, or never ask after, Boris' behaviour while he's on the road.

The world meanwhile, is falling to bits. As Reagan and Brezhnev wave their missiles at each other like two impotent drunks fighting in a public toilet, the threat of a nuclear war is clear and present. Above, a Soviet "Soyuz" space craft is circling, broadcasting radio messages back to the nation.

The Humorist is a comedy of unease. Boris' situation is intolerable, though his popularity lets him pay the bills and live a life that most of his countrymen – even his old collaborators – can only dream of. But, by playing it safe and sticking to the approved script, Boris has become everything he once loathed. His teenage son knows as much and relentlessly taunts Boris with the knowledge.

When it all comes to a head – in a bathhouse with a couple of very senior party members and a truly heroic amount of vodka drinking – Boris is reminded very quickly that he exists only by the grace of the people he pretends to tease.

This is an at times surreal and always inventive peek into the ludicrousnesses of a state-run life.

The Humorist is a confronting, literate and occasionally biting satire. Even if you probably had to "be there" to pick up on a great many of the jokes. I'd still recommend this anyone who likes their laughs on the bleak side.

If you enjoyed Yuriy Bykov's The Fool a few years ago, you will find plenty to keep yourself happy in The Humorist.