Days of the Bagnold Summer - REVIEW 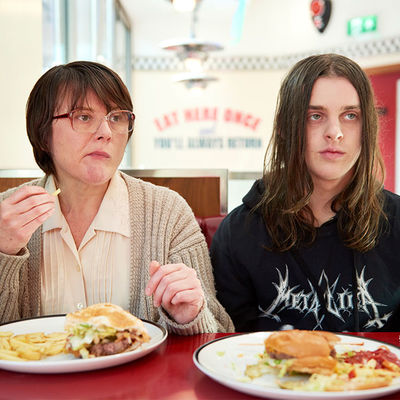 Some English comedies are like hot mustard: you shudder, you wince, you gasp, then you say “pass the mustard, please!“. Except that the boy in this heartbreaking comedy would never say please. He’s 15 and the world has robbed him of his generosity.

Daniel Bagnold (Earl Cave, son of Nick) has lank shoulder-length hair in need of a wash. He wears black T-shirts, preferably by Metallica. He was supposed to go to his father in Florida for the hols but his Dad’s new wife cancelled his trip. He’s now stuck at home in a modern London suburb with his Mum, who’s 52, frumpy and heroically stoic.

Sue (Monica Dolan) works in a library. She’s smart and self-aware, but lonely, struggling to pay the bills and keep her son anchored to the world. He treats her badly, blames her for his Dad leaving and never wants to talk or even walk the dog. She cops it sweet, rarely giving him the swipe he deserves. She loves him, pure and simple. He’ll come good eventually, she thinks, and even if he doesn’t … Sue is so lovely you want to hug her.

It may not sound like a comedy but parts of it are hysterical. It’s a love song to modern suburban Britain, with irony, bitterness and affection in equal measure. Simon Bird (an actor and director) is one of the smart young things remaking British comedy with deadpan, slightly kitsch black comedy (Richard Ayoade and Ben Wheatley are also in this club). Their tone is sometimes arch or sardonic, but usually naturalistic. They don’t do silly walks and cross-dressing: for them, modern life is strange enough as it is. This film could almost be played as a drama by Ken Loach or Mike Leigh − except that the script, by Lisa Owens, is funnier.

Bird starred in The Inbetweeners. He plays the enjoyably nasty brother Adam in Friday Night Dinner, alongside Tamsin Greig. She appears here as Astrid, mother of Daniel’s best friend Ky (Elliot Speller-Gillott). Ky is over-confident, gabby and irritating, at least to Daniel. The patronising Astrid recommends a chakra realignment for Sue, who’d rather a night in with the telly and the dog, thank you.

The film is adapted from a popular graphic novel (by Joff Winterhart) that captures all the pathos and melancholy of mother and son at a difficult point in their lives. As cruel as Daniel can be, he is basically a sweet kid who’s a bit lost. Earl Cave’s performance is finely judged: everything embarrasses Daniel. Monica Dolan’s Sue is a quiet monument to maternal strength, forbearance and dignity. The film could do with more urgent pacing and structure, but it’s meant to be minimal − not much more than an acutely observed, achingly accurate slice of modern life.

Days of the Bagnold Summer is in select Australian cinemas now!