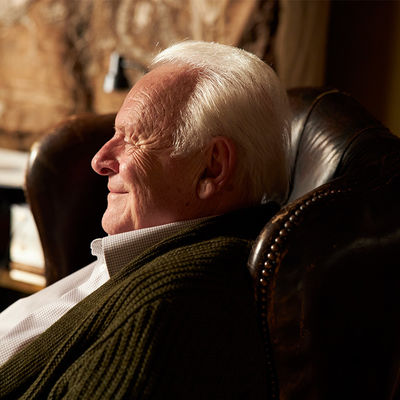 From his elevated view above Lauderdale Road, he can see the hustle and bustle of Elgin Avenue and he’s just a short distance from both the famed Abbey Road Studios and Lord’s Cricket Ground.

Sure he might be in his early eighties now, but he’s still perfectly independent and certainly doesn’t need to shift into a home. Yet that’s exactly what daughter Anne (Olivia Colman) appears to be implying.

She’s marched up to his home and warned him that if he continues to mistreat the in-home carers she’s organised for him, he’ll have to move out. Threatened her physically, called her “a little b....”, the latest one has claimed, Anne says.

“I’ve got a memory like an elephant – and I don’t remember doing that,” he spits back, outraged. “The woman is raging mad – I suspect she was stealing from me,” Anthony adds, citing the disappearance of his beloved watch.

She also has other news. She may be leaving London soon, making her concern for his welfare even more pressing. They are plans Anthony finds frankly laughable. “You’re not going to live in Paris. Wake up, you don’t even speak English….Honestly, all this nonsense is driving me crazy.”

As impressive as his turns as Hannibal Lecter, C.S. Lewis and Burt Munro have been, The Father is undoubtedly Hopkins’ finest hours on film. He is simply stunning as the increasingly defiant, belligerent and addled Anthony, struggling with the shifting sands of time, faces he no longer quite recognises and conversations that he either can’t quite recollect, or thinks he may have had before. There are moments of euphoria, moments of insightful lucidity, hints of wicked humour, bouts of despair and flashes of deep anger.

This confusion and “unreliability” is beautifully brought to life by French writer-director Florian Zeller. Adapting his own hit 2012 play, with the help of Atonement and The Quiet American screenwriter Christopher Hampton, it retains that production’s taut script and striking narrative devices, while making full use of all the cinematic trickery available (smart framing, forced perspectives, evocative music) to deliver a drama that’s truly emotionally devastating.

That means the clever deployment of a supporting cast that includes Olivias Colman and Williams, Mark Gatiss, Rufus Sewell and Imogen Poots, as well as subtle and more obvious shifts in room layout and, most importantly, chronology.

Sure, we’ve had impressive tales on the impact of degenerative diseases like Alzheimer’s before – witness Away From Her, Amore, or even the recent Supernova – but never something as immersive, or confronting as this.

This will strike a chord with anyone who has witnessed an ageing parent in decline.

A psychological mystery, a truly heart-wrenching drama and a wild emotional ride all at once, The Father is a devastating watch that will haunt you for days.