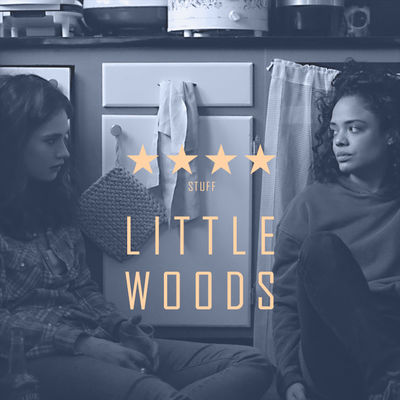 Her restitution is all paid up and she has does 10 days left on her probation. She even has a job interview for "something normal" in Spokane.

The North Dakota resident had been caught trying to smuggle prescription drugs in from Canada, but now all she's peddling are laundry and catering services to local oil workers. Problem is, too many of them remember her past career and are eager for Ollie to instead deliver them the meds they claim they need.

Perhaps aware of the temptations, her probation officer pleads with her to stay out of trouble – "you're so close", he reminds her.

However, two things threaten to push Ollie back over the edge. The bank is demanding $6000 in a week – or they will foreclose on her mother's house – and her troubled sister Deb (Lily James) is not only living in a parking lot, she's also pregnant again.

Writer-director Nia DaCosta's debut feature is a bravura and, at times, bleak look at women living on the poverty line in small-town America.

"It's been a rough time for a lot of people," one male character notes and Little Woods is full of characters eeking out existences of quiet (and not so quiet) desperation.  This is a drama for those who felt moved or were engrossed by the likes of Winter's Bone, Frozen River, Hell or High Water or 99 Homes.

With its visuals drained of colour, hand-held camerawork and an indie-fuelled soundtrack, it commits to an aesthetic that reflects the protagonist's leaden lives.

Virtually unrecognisable from her turns in Downton Abbey and Mamma Mia! Here We Go Again, James is terrific as a woman "whose choices are only as good as her options are", while Thompson (Thor: Ragnarok) is a revelation – making every scene count in her character's struggle to escape her previous life and seemingly inevitable fate.

A searing indictment of the US health system and lament for the loss of the fabled "American dream", Little Woods also makes for riveting viewing.