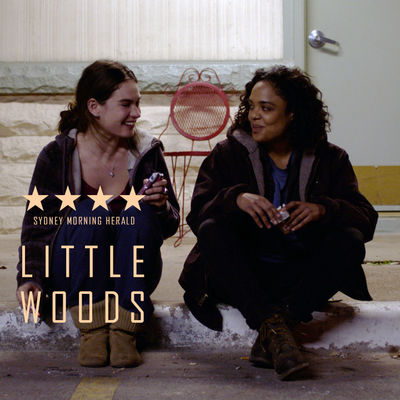 "The ambience is new and precisely evoked as a world of cruel contrasts."

This first feature from young American writer-director Nia DaCosta is set on the crumbling edges of American society where a single stroke of bad luck can precipitate disaster and healthcare is a luxury few people can afford.

Little Woods is a North Dakota fracking town where the shale oil boom is coming to an end, not with a bang or a whimper, but a long, loud howl of desperation.

The oil workers need every shift they can get and Deb (Lily James) and her adoptive sister Ollie (Tessa Thompson) are eking out a living by waitressing and delivering coffee and sandwiches to the oil fields. They’re getting by until the bank forecloses on their mortgage, giving them just one week to raise the money.

It’s the kind of scenario we’ve often seen on screen, but the ambience is new and precisely evoked as a world of cruel contrasts. While nature offers up a land of limitless possibilities, the people who live within it lead cramped, claustrophobic lives dominated by routine and devoid of hope.

A research trip to North Dakota inspired DaCosta’s script, and she likens the world she has fashioned to a modern Wild West, with a rough and ready economy functioning without much regard for the law.

Ollie knows it well, having been convicted for peddling smuggled prescription drugs to the oil workers. She has just been released from probation and a proper job is in prospect when the bank delivers its news, forcing her back into her old life with all of its hazards.

On first acquaintance, the sisters seem a little too classy for these frontier extremes. After all, James is still to shake off her signature role as the English rose from Downtown Abbey and Thompson seems a little too level-headed for a life of crime, but they both win you over.

James subdues the sparkling sense of wellbeing that has animated her best-known roles to give us a woman whose natural high spirits have been driven into hibernation.

And Thompson makes Ollie’s composure seem entirely plausible. She’s the practical one, who would much rather be doing the right thing, but if necessity dictates, she can apply the same level of efficiency to doing the wrong thing.

DaCosta infuses the action with an atmosphere of dread so insistent that you go through most of the film fearing the worst. There’s a new trap at every turn, and with each crisis comes a heightened sense of the system’s injustices.

While it’s not quite as subtle as Debra Granik’s superlative studies of backwoods America, Winter’s Bone and Leave No Trace, it’s packed with insights into the forces that produced the Trump presidency.