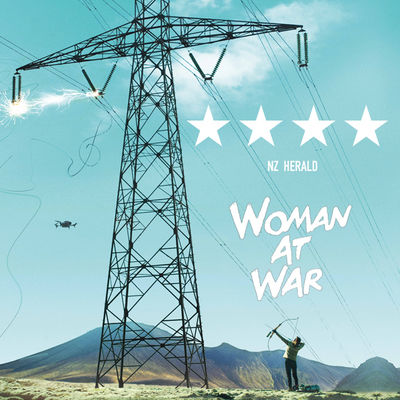 "Wonderfully offbeat...this thriller will put a smile on your face."

Woman at War presents the middle-aged film hero you've been waiting for.

Woman at War was described to me as an Icelandic thriller. It is set in Iceland and comes complete with thrilling scenes, but this story of one woman's war against the Government's co-operation with polluting multinational companies is more than just a thriller.

Director Benedikt Erlingsson provides a deft hand, with the tone moving between drama, thriller and comedy as he tackles the topical issues of climate change, preserving unique landscapes, and foreign investment. There's an obvious substance to these themes but it's done with warmth and wit and is wonderfully offbeat.

It's an unusual comment, but this thriller will put a smile on your face.

The story opens on Halla (Halldora Geirharosdottir), a lone woman on the Icelandic highlands firing an arrow across high-voltage power lines. After creating a power outage, she's on the run, evading helicopters and police until she's helped by a local farmer, who aids her escape.

It's an intriguing beginning, and an amusing one as the band responsible for the film's soundtrack appear in the back of the shot, like a live orchestra accompanying the scene. As the story progresses Halla begins to acknowledge their presence, with the drummer on his own becoming a foreboding sign.

Quirks aside, what makes this story such fun is that Halla is the last person you'd imagine would set about sabotaging the local industry. Middle-aged and the conductor of an a cappella choir, Hella likes swimming with her twin sister and hopes to adopt a child from Ukraine – she's a lovely, ordinary person, who's finally decided enough is enough.

Everything about this film is mesmerising; incredible landscapes, the performance of its lead character, the hipster band, a relevant topic and the idea one person's single-minded pursuit of what they believe in can make a difference.

Halla is the very opposite of the prevailing Marvel and DC comic hero, but it's hard to resist a middle-aged heroine running around the Icelandic countryside with a bow and arrow and dressed in a knitted jumper. Just delightful.