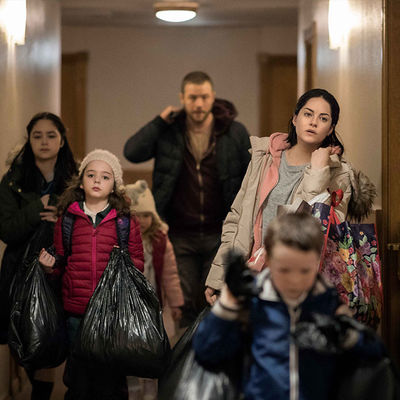 Roddy Doyle has written a very moving and insightful film about homelessness. Paddy Breathnach directs and it is powerfully acted, especially by Sarah Greene in the leading role – which put me in mind, just a little, of Hayley Squires in Ken Loach’s I, Daniel Blake. The potency of the film lies in showing us that the “homeless” are not a caste or tribe whose condition has been ordained at birth, and their situation is not a cosmic punishment for laziness – they are people like everyone else whose situation has been created by economic forces.

Rosie (Greene) is a mother of four, her partner John Paul (Moe Dunford) works in a restaurant kitchen; they were living entirely happily and responsibly in a rented house in north Dublin, until their landlord decided to sell it. So the family are looking for somewhere else to rent, but rents are unaffordable, and during their increasingly panicky search for a new place, they find themselves having to beg social services for interim overnight placements in hotel rooms: a different place each time.

And all the time they have to keep up appearances, while the possibility of having to sleep in the car gets ever closer. Rosie cannot bring the family to stay with her widowed mother for agonising personal reasons, and the strain of not admitting to their friends or children’s teachers what is happening is almost unbearable.

We follow Rosie, John Paul and the children as they visit each of their stations of the cross, of which the most unbearably sad is when Rosie and her family must go to a grim cafe that is about to close and, by making individual visits to the toilets with their towels and toothbrushes, they get “ready for bed” before traipsing out together to the car. There is great sadness in this film – and great anger.