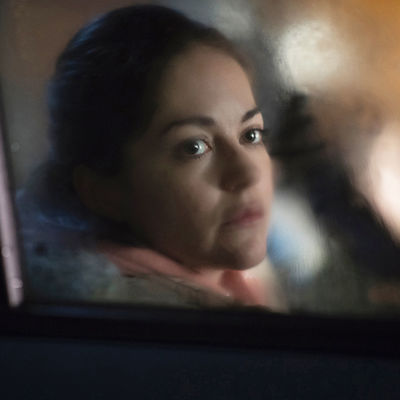 A young family in modern-day Dublin are between houses.

They had lived in their last rental for seven good years, making and raising their four terrific kids. But now the owner has sold the house from under them and the Davis-Brady whānau are searching for a new place to call home.

Dublin was a property speculators wet-dream until the Global Financial Crisis hit, after which a lot of the housing stock was concentrated in the hands of a smaller number of people. As in New Zealand, within a mismanaged decade, those "market forces" we are all required to genuflect to, had put a decent house out of the reach of many decent people.

Rosie takes place over a handful of days and nights. Often the action is confined to the family car, as mother Rosie phones and door-knocks around the over-booked short term accommodation providers, while partner and dad John works all the over-time he can get at work and spends his lunch-breaks applying for long term rentals.

And if any of the above sounds grim, bleak, or depressing, then put the thought out of your head immediately. Because Rosie is a five-star treat.

First up, there's a script from Roddy Doyle. Doyle has been one of Dublin's fondest diarists for decades now, with his Barrytown Trilogy of The Commitments, The Snapper and The Van all making it very successfully from the page to the screen.

Doyle knows the rhythms of speech and life in his hometown inside and out, and he brings an unfakeable authenticity, warmth and wit to the family's life that is a joy to spend time with, even as our hearts break for their predicament.

Then, there's Sarah Greene as Rosie. Greene isn't a household name. If you recognise her at all, it'll probably be for her work in the TV series Ransom. But here, as the always in motion, always attentive, just-getting-through-each-day young mother, Greene absolutely shines. In a thousand tiny moments, movements and expressions, Greene brings this woman to life and wins us over for all time. Given the ages of the actors playing the children, I can only guess that a lot of what we are watching is being improvised on the spot. It is an astonishing, gorgeous and utterly selfless piece of work.

With Greene's performance and Doyle's script to work with, director Paddy Breathnach keeps the film percolating and believable at every turn. Without the tacked on contrivance of a "happy end", Breathnach still takes us out on a moment of dignity and optimism that these people will prevail.

Breathnach usually works in the crime/comedy genre that Ireland and the UK have made their own. His I Went Down (1997) is a filthy minded gem of a thing you'll adore if you can find. By bringing his comedy chops to this downbeat tale, Breathnach sidesteps the anger and angst the film could so easily have slid into, and focuses on the love that binds these people, not the circumstances that assail them.

Comparisons to Ken Loach's I, Daniel Blake are probably valid, but I preferred Rosie.

With the possibility of no International Film Festival in our cinemas this year, treat yourself to Rosie. You won't regret it.