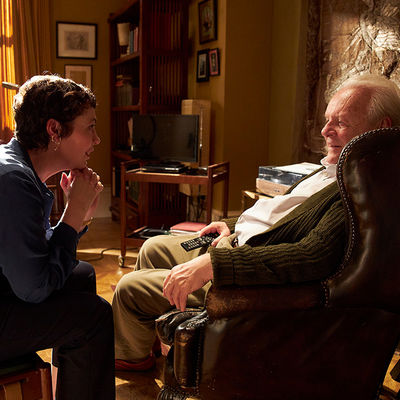 Time slips in the French director Florian Zeller’s debut film. Apartments also start to blur and there’s something not quite right about the people. That’s how it feels from the perspective of Anthony (Anthony Hopkins) — and soon from ours too. Zeller, adapting from his own play with his co-writer Christopher Hampton, doesn’t just show us Anthony and his daughter, Anne (Olivia Colman), trying to cope with his mental decline, he takes us swimming in the rising tide of Anthony’s forgetfulness and confusion.

At first it’s just the time that seems to be off — perhaps that’s why Anthony is so obsessed with the wristwatch he keeps losing, a talisman of certainty that he just can’t keep track of. Conversations break off when people leave rooms, and when they restart there’s a sense that hours — or could it be days or weeks? — may have passed. Anne tells him that she’s moving to Paris, but on other occasions she says it’s ridiculous. Things seem to be moving in the apartment too; it almost looks like his home, but is it Anne’s place?

Then there’s the strange man in the living room, who claims to be Anne’s husband, Paul (Rufus Sewell, but sometimes Mark Gatiss). Nothing is certain; even Anne can look different.

These are the sort of horrors that usually inhabit psychological thrillers, but this is Anthony’s real world and Zeller makes us live in it too. It’s an unsettling and anxious place to be, and one that is likely to make you feel devastated all over again for loved ones suffering with or lost to any form of dementia.

Sometimes films feel constrained when they are adapted from a play, but here the chamber setting only adds to the sense of Anthony’s life closing in on him. Careful production design that makes the apartment subtly change over time generates unease, and the script highlights how the repeated routines of life — listening to Bizet’s The Pearl Fishers, a bad joke about the French, or chicken for dinner — only add to the sense of one day bleeding into the next.

This adaptation, which had its world premiere at the Sundance Film Festival in Utah, was written specifically with Hopkins in mind, right down to Anthony’s birthdate, and the actor offers the perfect blend of vulnerability and recalcitrance in the role. One minute he’s turning on the charm with his new carer (Imogen Poots, or maybe Olivia Williams), the next he’s angry or his eyes fill with tears.

Colman mirrors his emotional fragility, jollying him along while trying to wrestle down her grief at watching part of him leave. The sense of loss is acute and as things get worse, you feel your heart break in ten directions at once.