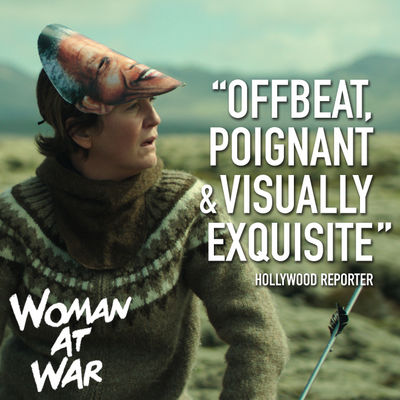 Writer-director Benedikt Erlingsson ('Of Horses and Men') premiered his new feature, about an Icelandic activist taking on big industry, in Critics' Week at Cannes.

An impressive follow-up to his strikingly eccentric debut, Of Horses and Men, Icelandic auteur Benedikt Erlingsson's second feature-length fiction, Woman at War (Kona fer i strid), is another skillfully crafted, surreally told tale of man and nature — or in this case, woman and autre — but one with more emotional depth and sharper political undertones.

Starring Halldora Geirharosdottir as an ecological "terrorist" who sabotages her country's power grid in order to preserve its breathtaking landscapes, the film starts off on rather playful footing but gradually builds into something more thrilling, and moving, as our heroine goes on the run from authorities. Premiering in the Cannes Critics' Week sidebar, War could see pickups in both Europe and elsewhere as a work that's both quirky and altogether timely.

Teaming again with cinematographer Bergsteinn Bjorgulfsson (Black's Game), who captures the immensity of Iceland's rural highlands in monumental widescreen compositions, the director and co-writer Olafur Egilsson (Vikingar) craft a modern-day fable about a female David taking on the Goliath of her country's government and industry — even if the Goliath in a tiny place like Iceland consists of only a handful of people.

When we first meet Halla (Geirharosdottir), she's skillfully using a bow and arrow to blow up a power line in the countryside, causing a blackout that temporarily shuts down a nearby aluminum factory. Pursued by the police all the way to her picturesque home in Reykjavik, Halla quickly slips back into her regular identity as the 40-something head of a local choir, all the while plotting her next move.

Right off the bat, Erlingsson establishes the film's vibrant and offbeat tone through his carefully calibrated imagery (a mix of extreme wide shots and close-ups), as well as the way he employs David Thor Jonsson's score by having the composer and other musicians appear within the scenes themselves. It comes across as a bit gimmicky at first — if not something already seen in a film like Birdman — but as the story progresses and grows increasingly intense, Jonsson's presence winds up adding another layer of feeling to the action.

The plot soon thickens once we learn that Halla has been trying for years to adopt a child, and that they've finally found one for her in the Ukraine. We also learn that she has an identical twin sister (Geirharosdottir again), who teaches yoga; a possible cousin (Johann Siguroarson, I Remember You), who raises sheep way out in the boondocks; and a co-conspirator (Jorundur Ragnarsson), who keeps her abreast of government actions.

All of these characters try to help Halla in her quest to preserve Iceland's natural beauty, especially after she decides to take her activism to the next level about halfway through the story. It's at this point that the film shifts from a more leisurely vignette mode into something closer to an epic survival tale, with Erlingsson bringing out the big guns — or more like helicopters, drones and lots of farm animals — as the cops track Halla through the highlands while she attempts to make her way out of the country.

There are a few standout scenes in War's closing reels, as well as a few cleverly executed twists, yet Erlingsson doesn't let them undercut the movie's emotional sway. Halla's antics may seem a bit foolhardy, and her tree-hugging (or Earth-hugging in this case) a bit crazy, but the woman's willingness to sacrifice her happiness for what she believes is a valuable cause is both admirable and ultimately touching. A final sequence set in the Ukraine further pushes the film's environmentalist stance, revealing what happens to a nation when factories run rampant and industrialism winds up destroying the local ecosystem.

Alongside the stunning camerawork and eclectic onscreen music — the latter a mix of accordion, piano and choral numbers performed by a cast of recurring characters — editing by David Alexander Corno keeps a steady pace but allows room for moments of deadpan humor and visual bliss.