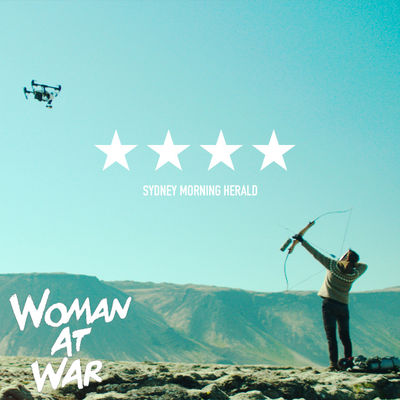 "Ice and fire in this minor classic"

Bleak windswept landscapes, folk in heavy woollen jumpers, cattle dogs and civil disobedience – what's not to like? This might be the best thing to come out of Iceland since their 2014 World Cup football team and that other-worldly clapping thing they made famous.

That's the thing about Iceland. They are so ... Icelandic. There aren't that many of them but their culture is deep and old, and they produce some spectacularly good films that are firmly rooted in their culture.

Australian filmmakers used to worry a lot about making films that reflected our distinctiveness – and occasionally we still do – but it seems to come naturally to the handful of fine filmmakers working in Iceland. It's something to do with the way they use landscape, humour and an implicit sense that the world is much stranger than everyone admits.

Rams, from a few years ago, was a good example.

Woman at War is a terrible title for a film in which there are no guns, no violence and only a single drop of spilled blood. The heroine Halla (Halldora Geirhardsdottir) is a student of non-violence, but also a woman of action. In the first scene she shoots a cable over a tower taking electricity to a Rio Tinto aluminium smelter, cutting off its power.

She then runs, through some of that high boggy treeless mountain landscape that can be found only in Iceland. As the helicopters come looking, she hides in clefts and bogs, finally dragging herself back to her city life – where she conducts a choir, living a quiet life as a single woman.

Halla is about 50, about as far from the usual depiction of a cinematic woman-warrior as it is possible to get, but that is the beauty of the character. She's like the rest of us for a reason. If the film has an agenda, it is to dramatise the idea that we are running out of time as a species. Time for action.

Halla has done the electrical sabotage trick five times already and the politicians call her a terrorist. They have called in help from American and Israeli intelligence. The net is tightening around her.

If this were all the film offered – an eco-lecture, draped in accusation – I would not be giving it a rave review. What I loved is the combination of purpose and artistry: the depth of feeling, the depth of storytelling, the profound connection to the landscape in which it is set, and the superb and decisive humour.

At one point, Halla has to drag the carcass of a dead ram over her head in order to fool the heat-seeking helicopter above. Now that's entertainment!

Humour is the engine, but it's always in balance with a sense of character – and that comes from Halldora Geirhardsdottir's remarkable performance, which combines modesty and steely nerve.

She does not act like she's in a comedy; nor like she thinks she's anything special. When a letter arrives from the adoption authorities, in response to an application that she made four years earlier, the film shifts gears, becoming so much wider in ideas and gravity.

The director Benedikt Erlingsson was himself an eco-warrior when he was younger (at 18, he chained himself to a whaling ship) but he buries any desire to preach. You have to pay attention to hear the ecology message, but not to feel it.

That comes from the film's strong connection to the outlandish Icelandic landscape. The camera gets low and close, so that we can almost smell the heather, and the sulphurous tang of the hot springs.

Clever directors sometimes like to tell us how smart they are; Erlingsson holds himself back. There's a lot going on beneath the surface of the film, in terms of its classical story structure and ideas, but those things are never sign-posted.

Erlingsson is about 50 – with a long history of theatre before he turned to film. He brings artistic humility as well as ambition – a desire to find a new polemic for the times.

The film is very freestyle: a band of three musicians often appear at the back of the scene, watching the action, like a Greek chorus, inventing a soundtrack in response to what they are seeing. He's not the first to do that, but he might be the first to do it so well.