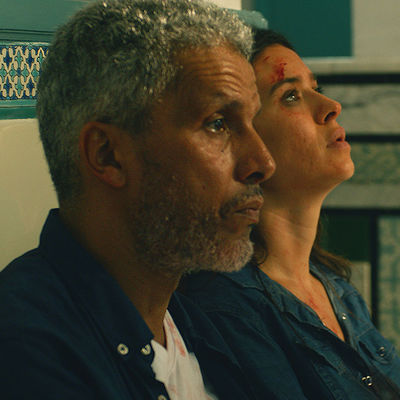 A Son, written and directed by Mehdi Barsaoui, in his feature debut, opens with a family heading off to a picnic with friends. The father, Fares (Sami Bouajila), is driving, with his 11-year-old son Aziz (Youssef Khemiri) on his lap, hands also on the steering wheel. His beautiful mother, Meriem (Najla Ben Abdallah), is in the passenger seat.

The car is a Range Rover. At the picnic, the adults drink beer and wine and laugh at R-rated jokes, while the kids play in the distance. Fares is chief executive of a sales firm and Meriem is human resources manager of a ­Middle East-wide corporation. This pre-titles sequence tells us the family are well-off, middle-class and liberal-minded in a Muslim country.

The time — September 2011 — is important. The Jasmine Revolution that overthrew long-time Tunisian president Ben Ali has happened, but the path ahead is ­unclear and uncertain. As one of the friends says, “We’ll be laughing less when the Islamists are in power.”

The neighbouring country, Libya, is in the middle of a civil war. Muammar Gadaffi is still there, but only just. The daily body count from the fighting is high.

This is an Arabic language film with English subtitles. Bouajila, who you may have seen in the 2006 French film Indigenes, and his co-star are brilliant throughout, and particularly in the long sequence that comes a day or so after that picnic.

The family decides to spend a weekend at an upscale resort. So it’s back into the Range Rover and onto the highway, radio on, everyone singing along to the pop music the boy likes.

They are overtaken by a military vehicle and then disaster strikes. Islamic insurgents launch an attack. Fares manages to reverse the Land Rover and speed off, but not before a bullet penetrates the vehicle and his son.

What happens next — the drive to hospital, the child bleeding on a gurney, his blood-spattered parents comforting each other in the waiting room — is hard to watch yet impossible to look away from.

The chief paediatrician (an excellent Noomen Hamda) tells the couple their son’s liver is destroyed and that only a transplant will save him. Otherwise he will live for “two weeks, maybe three”. The parents take blood tests to ­determine which of them is most compatible.

When the doctor has the results he calls Meriem into his office, alone, and gently shuts the door. It is here that the story takes a dramatic twist. The look on Meriem’s face, in a long, quiet shot, is desolating.

What follows is a searing exploration of the complexities of marriage, parenthood and living in a country under Islamic law. What Fares and Meriem go through could happen to a couple in Australia or anywhere else. Your heart will go out to them. But where they are does make it more difficult. For starters, organ donations from someone outside the family are forbidden.

At one point Fares is approached by a man, Mr Chokri (Slah Msaddak), who says he has a solution. It is here that the turmoil in Libya becomes important. Mr Chokri seems sympathetic but when we see his solution, it is soul-destroying. The movie unfolds over a couple of days as Fares and Meriem try to save their only child. It is an outstanding piece of filmmaking.