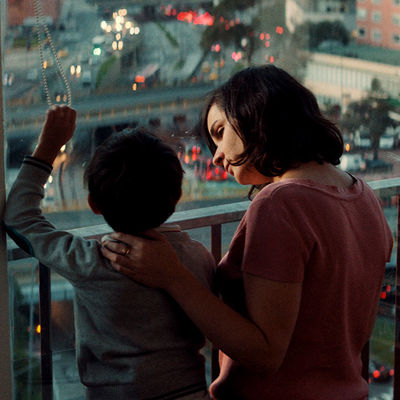 There’s enormous tenderness in this drama of disillusion from Colombian director Franco Lolli – but also an overwhelmingly unsentimental sense of life’s seriousness and painfulness. In the leading role, Lolli has cast a non-professional: his cousin, the author and academic, Carolina Sanín, and she is outstanding. With every gesture, every moue of weary patience, she conveys the awful strain her character is under.

Silvia is a single mother in Bogotá. She has a stressful job as legal counsel to an arrogant, slippery public official, who is clearly scheming to let Silvia take the blame for a recent perceived irregularity in public spending. She is also having to deal with her difficult and cantankerous mother, Leticia (played by the director’s own mother, Leticia Goméz), who has terminal cancer, and with her young son, Toni (Antonio Martinez), now being bullied at school for not having a dad. The mystery of the absent father is something that the film will coolly reveal later.

Silvia experiences a bizarre upheaval in her emotional life through a coincidence that you might have found in a late-period Woody Allen. She is aggressively interviewed about the spending controversy on the radio by a bumptious presenter, Abel (Vladimir Durán), and then through an embarrassing quirk of fate she meets him at a party and realises that he is coming on to her.

Bizarrely, they begin what is at first a very happy relationship, to the furious disdain of her querulous mother, who thinks that this is a terrible indignity. Her disapproval ignites Silvia’s long-suppressed resentment of her failure to give her any support. Silvia’s emotional life continues; the moment-by-moment ordeal of her mother’s deterioration continues; the legal row at her workplace continues. Lolli shows that it is all equally important; it is all the rainstorm of life that Silvia has to battle through with no umbrella.