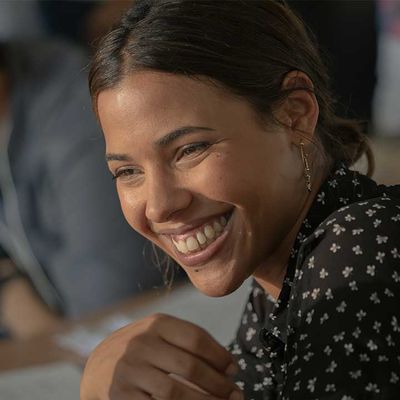 This French-Arabic comedy-drama, originally titled La Vie Scolaire, earns solid marks for a keep-it-real approach to the subject of classrooms on the fringes. The setting is a middle school in Saint-Denis, a Paris suburb populated largely by non-white migrants. The students are a wild bunch not given to study, obedience or self-control. How’s that for a theme that transcends language and borders?

Enter Samita Zibra, warmly and wonderfully played by Zita Hanrot, the young and newly-appointed vice-principal who refuses to see these kids as hopeless cases. Think Michelle Pfeiffer in Dangerous Minds (no, really — that movie’s theme, Coolio’s “Gangsta’s Paradise,” figures in the closing credits). No one can understand why this classy authority type would come to Saint Denis (hint: her lying thief of a boyfriend is an occupant of the local jail). Samita gets down to work with the help of Moussa (Moussa Mansaly) and Dylan (Alban Ivanov), two hall monitors given to sitcom bantering when they’re not knocking heads together. A teacher, Thierry (Antoine Reinartz), offers a sympathetic ear and the possibility of future romance.

We’ve been here before. But what raises the bar are the kids themselves, mostly non-professional actors who zap the film into a harsh reality that cuts the bullshit factor by half. Liam Pierron excels as Yanis, a bright student who doesn’t see the point of school or getting ahead in a world that treats immigrants as little more than savages who are vilified in the media and harassed by the police. Samita’s sincere desire to mentor Yanis and encourage his interest in film as a potential career are continuously blocked by the system and the boy’s propensity for self-destruction.

Directors Fabien Marsaud, aka slam-poet and rapper Grand Corps Malade, and Mehdi Idir, a hip-hop dancer, are both Saint Denis homeboys; they’ve based their screenplay on their own experiences in middle school in a town known for its high crime rate and numerous drug busts. The duo’s excellent first film together, 2017’s Patients, is drawn from Malade’s own experience in hospital after a dive into a shallow swimming pool left him comatose for three months and paralyzed (a year in rehab helped him recover the use of his legs). School Life reaps the benefits of the duo’s emotional investment in the story they’re telling. They achieve a documentary-like authenticity through the anarchy of the classroom scenes that burst with a life often missing in the more traditional subplots. And Hanrot’s funny, scrappy, fully-committed performance fulfills their trust in letting a female educator with a fire to make a difference carry their movie to a winning finish.