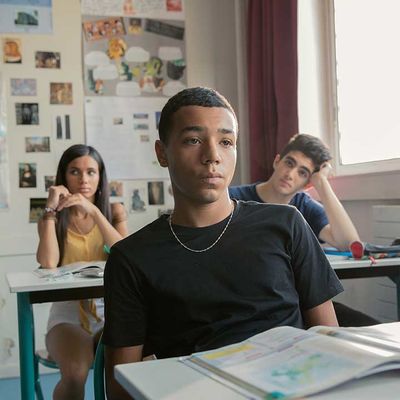 Any hopes St Denis’ College des Francs/Moisins’ new deputy principal Samia Zibra (Zita Hanrot) had of the academic year getting off to a quiet start are dashed by lunchtime.

A playground fight breaks out in the first recess and, by the time the final bell of the day rings, there are already two students in detention.

Rowdiness, insubordination and tardiness abound and then there’s her fellow teachers. If they aren’t complaining about their allocated classes, then they’re engaging in inappropriate banter, letting discipline slide, or audibly taking the mickey out of their charges.

However, Samia is determined to make a difference, whether it is finally calling out their sweary PE teacher on his “top competition sports jargon”, persuading a female student that heels and a skirt aren’t the best for exercising in, or that throwing a carton of mix at a history teacher isn’t appropriate classroom behaviour. She can see the potential in some of her young people, she just wants to help them realise it too.

“Don’t treat adults and teachers as your friends,” she advises the gifted-but-constantly-in-trouble Yanis (Liam Pierron), before adding that “I know you’re better than this.”

“What if I’m not?” comes his confident, yet confused reply.

And it’s that mix of supreme self-confidence and deep-rooted uncertainty about the future that’s at the heart of this crowdpleasing combination of sometimes uproarious comedy and searing social commentary.

It’s actually easy to see why writer-directors Mehdi Idir and Grand Corps Malade’s (aka Fabien Marsaud) movie was such a box-office smash in its native France. It successfully marries the swagger, vibrancy and sometimes troubling relevance of Ladj Ly’s Les Miserables (albeit presenting the country’s “cosmopolitan” tensions in a gentler, friendlier manner) with the wit, colourful characters and semi-documentary style of Olivier Nakache and Eric Toledano’s brilliantly conceived and executed wedding farce C’est La Vie.

This feels like a French, cinematic version of noughties BBC dramedy Teachers, with its artistic flourishes (an early montage juxtaposes the students’ and staff’s early morning routines), running gags (the best one involving “The Simpsons Challenge”, where teachers’ vie for the stupidest “punishment lines” they’ve made students write on the whiteboard) and rising tensions, as a year in the life of “low-life school, in a low-life hood, in a low-life town”, where “all the crazies are put into one particular class”, unfolds.

This is a movie where, if at times things threaten to veer into Dangerous Minds territory, it simply embraces it by playing Stevie Wonder’s original 1976 Pastime Paradise instead of Coolio’s Gangsta sample, where Herb Alpert’s instrumental classic Rise sets the initial tone and a student celebrates doubling their maths score “from 0 to 1”.

Entertaining and enthralling from start to finish, School Life is well worth seeking out.