THE MYSTERY OF HENRI PICK - Review 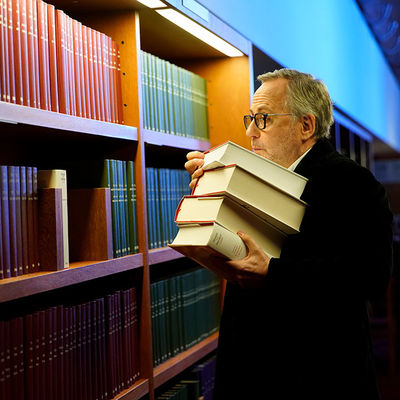 In present day France, on the wild and outrageously beautiful Breton coast, there is a village book shop.

And in that book shop, in an annex to the main building, there is a very special library. It is a Library of Rejected Manuscripts, where downcast and declined authors can drop off – in person, no mail-ins accepted – their masterpieces that the world wasn't quite ready for. It is a room full of shattered dreams, galloping ennui and many, many quite dreadful pieces of writing. But, amongst the dross, there may be a few pearls.

And when publishing company minion Daphne (Alice Isaaz) happens upon a red folder containing a few hundred pages of deathless prose called The Last Hours of a Love Story, her heart skips a beat.

According to the frontispiece, the novel's author is one Henri Pick; the town's beloved pizzeria owner and cook, who has been conveniently dead for two years. But not even Pick's widow or adult daughter can recall ever seeing Pick write – or even read – a book.

No matter. Daphne's employers rush the novel into print, and it duly becomes an international sensation.

Is it too good a backstory to be true? “Absolutement!” says ageing literary lion Jean-Michel Rouche (the wonderful Fabrice Luchini), who has a televised book show on which to declare the novel a fraud and a hoax, much to the consternation of Pick's family.

Rouche goes on the road, accompanied by Pick's eldest daughter, both of them keen to find the truth, even if they each want that truth to tell a different tale.

The Mystery of Henri Pick is a terrific way to pass the time. It is a comedy, a mystery, a road trip, a romance and a pretty decent literary drama, all set against a backdrop of gorgeous scenery and unfailingly attractive and well-imagined characters.

There's some pretty good jokes, which probably get better the more novels you have read, and a couple of decent twists and turns, as well as red herrings by the kilo. That the film is also an adaptation of a best-selling novel just adds another layer to our enjoyment.

The Mystery of Henri Pick is in NZ cinemas now, and opens in Australia 29 October!