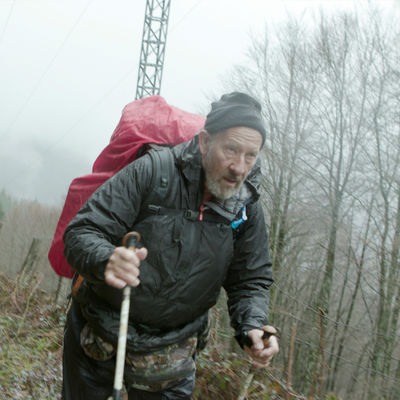 The pain in Spain: Camino Skies star Terry Wilson sees the trek as a 'metaphor for life'.

"Believing the world would be a better place if everyone walked the Camino because of the life lessons it teaches, Terry says he would walk it every year if he could afford to."

Camino Skies is a story of life, love and loss on the Camino de Santiago.

Heading into a village along the Camino De Santiago in northern Spain, Terry Wilson was stopped by an unusually chatty old man.

Locals along the famous pilgrimage route don't often stop to talk to walkers because there are so many "they'd be there all day if they did", Terry says. But this man showed a keen interest in the then-68-year-old from Manawatu.

When Terry told him he was from New Zealand, the stranger drew almost too close for comfort.

"You know what they mean by personal space? Well he was invading it. But he had quite a good command of English and I thought "jeepers". 'Cause that's one of the biggest things to getting a conversation going on the Camino."

Terry was making the 800 kilometre trek in memory of his granddaughter Maddy, who had died unexpectedly at the age of 17 after a lifelong battle with cystic fibrosis, as well as to raise funds for charities Cystic Fibrosis and Cure Kids and do some "mental and spiritual repair work".

He was wearing a t-shirt with Maddy's picture on it and the man asked who she was. When Terry had explained, the man put his fingertips to his lips, kissed them and then "went straight through my personal space and put them on her picture for a second or two."

The man then put out his hand, palm turned upward, and Terry, a Catholic who had nonetheless been grappling with spiritual issues, instinctively put his on top of it.

"So there we were, these two old men standing in a sunny little lane holding hands. He held my hand like that for about 10, 15 seconds, which is an awfully long time for somebody to hold your hand. He just looked and me and sort of smiled. And when he finally let go, he said "she'll be alright".

Relating the story to nuns back in New Zealand, one asked him whether he was sure he didn't know who the man was. Suddenly, the scenario that had been replaying in his mind since it happened made (almost) complete sense.

"That man knew who I was. He could look straight through me and knew I was receptive and needed reassurance… I am very suspicious that there was something happening at a much higher plane… That wasn't just an old man. I feel very, very privileged to have had that experience."

.For many of the hundreds of thousands of people each year who tackle the Camino, the month-long pilgrimage is an emotional and spiritual journey as much as a physical one. But Terry hasn't come across anyone who has been able to pin down what makes it so special.

Terry was in a dark place, struggling with depression, when a priest suggested he read about Saint James, the apostle who lent the Camino its English name, The Way of Saint James. He never got around to it but did watch The Way, a 2010 drama starring Martin Sheen about a grieving father completing the walk for his dead son, on Netflix.

"By the time it finished, I was in tears. I remember saying to myself, because my wife had gone to bed, "You were too bloody lazy to read it so you've got to walk the thing"."

Until then, Terry says he "hadn't walked further than the letterbox" in about 45 years.

"I told my wife and she knew I needed to clear up some things and said "Well, if that's what you want to do, go for it". So I started training."

When Maddy died about a month later, he grew even more determined.

"I think you get the most out of it if you walk it on your own because it gives you time to talk to yourself and to people you don't know. If you're with a group, people tend to walk straight past you because they don't want to intrude."

Still, he's admits he found the trek "gut-bustingly hard", particularly the first day. Starting in the French border town of St Jean Pied de Port in France, the Camino Frances - the most popular of the network of routes - climbs some 1500m over 25km through the Pyrenees, descending to the small Spanish settlement of Roncesvalles.

"Shattered" by the time he reached the halfway point, he was close to collapse by the time he staggered through the door of the Roncesvalles albergue (hostel) where he would spend the night.

"I'd run out of water and my legs were like jelly… I was waiting in the foyer with a large group of people, leaning on my walking sticks, when I heard a voice from across the room yell "Senor! Senor!". We all turned around, like "What's he on about?" and he was pointing at me and saying "Yes, you senor. Sit down!" He could see I was about to drop."

A volunteer at the albergue, the man brought the forms that had to be filled out to Terry and climbed the stairs to check on him in his bunk three times that night. When they ran into each other later on, the man said he'd been worried as "we've had people die here that were as bad as you".

"That's high regard," Terry says. "You don't get that sort of thing from stangers everyday. But many of the locals will show you that sort of empathy. Spain is a beautiful place and its people are beautiful and that makes [the Camino] as well."

Two months after arriving back home, Terry received an email from Australian film producer Fergus Grady asking if he would like to walk the Camino again for a documentary he was making about Antipodeans on the trail. Terry didn't need any convincing. His only request: That his brother-in-law Mark Thomson, Maddy's father, be allowed to tag along too.

"He'd expressed an interest in walking it after he saw what it did for me," Terry says. "I wasn't aware it was so evident."

The pair are among six Kiwis and Aussies to feature in the documentary, Camino Skies, which hits cinemas nationwide on July 11.

Terry found walking with a group "enjoyable", but missed the time to think he'd had on his first trek.

"We had our ups and downs but we all survived and had a regard for each other."

Back home, it wasn't long before Terry's feelings of restlessness returned and he realised the Camino had him hooked.

"It's like a drug," he says, noting that he is working on a book on the route called God's Cocaine: The addiction of the Camino. "It takes you about a month to get over it and then you start going "Oh, I'd love to be there again. You feel so listless; like something's missing. I've heard of people who walk it every year just to charge themselves up."

His eldest daughter provided a solution, telling him she was keen to do the walk herself. When she hadn't made any firm plans after two months, Terry decided to give her a nudge and posted a message on Facebook saying he would hit the trail again.

"She took the bait and said "What about me?" And I said "You come. No problem"."

Once his daughter had got into her stride on the trail, he made sure he gave her the space he felt she needed to get the full benefit of it.

"Father and daughter walking together, you think "hmm, is this going to work?" Well, it worked a treat. Because we both gave each other space. Well I made sure she got space. And she enjoyed that because she didn't have to talk to daddy seven hours a day for 38 days straight. She got to meet people."

Terry has come to see the Camino as a metaphor for life, saying you start out on your own and go on to meet many different kinds of people, some of whom become intrinsic to your journey. While he initially felt "very awkward" sleeping in close proximity to total strangers in hostels, he soon got used to it, saying walkers quickly turn into a "Camino family" who look out for one another.

Unlike in real life, however, Terry says you always get a chance to put things right on the Camino.

"If you get it wrong, you might end up in the wrong village for the night but you just stick it out and get back on track the next day.... Walking with all your possessions on your back, you learn how little you need in life to survive. You start to say "Jeepers, do I really need the flash house, the TV, the ride-on mower?"

While physically gruelling, Terry feels more Kiwis should give it a go, saying he's seen many an overweight and elderly person tackle it successfully.

"I've seen some pretty big people plodding along and you think "wow, are you serious?" But you get to a cafe at the end of the day and guess who's plonking down beside you?. I was moaning my butt off outside a cafe the last time, saying "I don't need this! I'm 70!" And a lady leaned over and said "Sorry son. I'm 78 and I'm doing it." That put me in my place."

Walkers should expect to be exhausted at the end of each day, but typically recover quickly, he says.

"You have a shower, you sit down at a cafe and have a wine or beer and within about two hours you say to each other "I could just about do another 10km"

Believing the world would be a better place if everyone walked the Camino because of the life lessons it teaches, Terry says he would walk it every year if he could afford to.

"I've been back about six weeks now and I'm a mess. I'm just sitting around watching TV and putting on weight. So if somebody was to say let's go back, I'd say "Yep, when do we leave?".