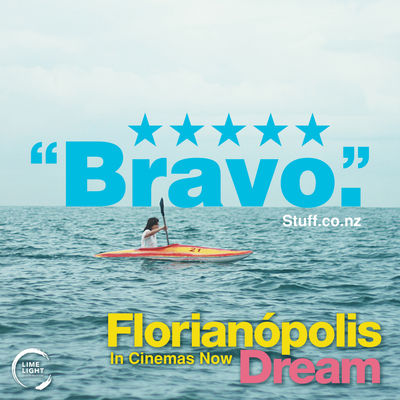 Sometime in the very latter years of last century, in that brief moment in the epoch in which one could wear a Nirvana T-shirt, but not own a cellphone, parents Pedro and Lucrecia and their teenagers Flor' and Julian have decided to take a vacation.

They drive from their native Argentina to neighbouring Brazil, specifically the coastal resort area of Florianopolis, where, after their first choice of accommodation turns out to be a grimy shack, they rent a beach-side cottage from the charming, louche and happily promiscuous Marco; a man who wears his speedos to dinner and makes little secret of his attraction to Lucrecia.

And, with Pedro and Lucrecia newly separated, although still sharing meals, holidays and custody of the kids, there really is no reason for Lucrecia not to indulge a summer fling. Except, life is never that simple. And with apparently-to-be-ex Pedro also throwing himself back into the dating pool and both kids having caught the eye of a couple of toothsome locals, the stage is set for what could be a broad and funny farce of seaside sex, sun and shenanigans. And that might not have been an unenjoyable film.

But writer/director Ana Katz (My Friend from the Park) has got much more in mind for Florianopolis Dream than a few laughs and a quick round of esconder la salchicha.

Pedro and – especially – Lucrecia (played by Argentinian veterans Gustavo Garzón and Mercedes Morán) are perfectly drawn characters. Their backstory – one is a psychologist, the other a psychiatrist – is never the subject of cheap laughs, but it does provide a seam of gentle satire for Katz to mine.

The web of relationships, between the parents and the children, with each other and between Lucrecia and the also well-drawn Marco are all credibly and economically sketched in. There are no "life lessons" here, thankfully, but a small evolution of the family's dynamic is deftly and likeably realised.

There is simply not a false note or convenient loop-hole in the script or anywhere on the screen. Every choice – of casting, setting, costume, everything down to the battered brown Renault station wagon the family get about in – seemed to me to be perfectly and intelligently chosen.

Florianopolis Dream is a funny, entertaining and enjoyable couple of hours. It is also an ambitious, nuanced, beautifully well performed and gorgeously insightful film, dressed up – very convincingly – in the threads of a farce. Bravo