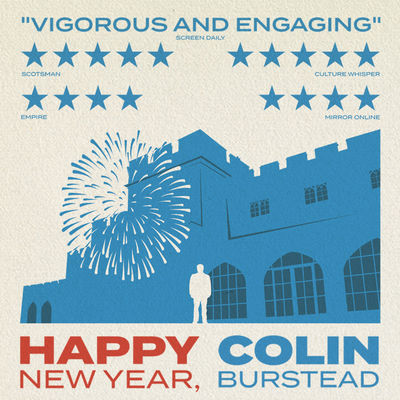 Ben Wheatley’s new film begins epically, with an unassuming suburban bungalow. Outside stands Neil Maskell’s middle-aged Colin, vaping for England in his sleeveless V-neck, for 15 seconds, in profile, in slow-motion, soundtracked by a score that makes it feel like a Western. For the next 90 minutes, everything ordinary is afforded such glory. It is kitchen-sink Sergio Leone. And a battle awaits.

Wheatley has half-joked that he did Mike Leigh’s Nuts In May with Sightseers, and with this he’s onto Abigail’s Party, but he’s selling himself short. Certainly there are some similarities, but he’s also said Happy New Year, Colin Burstead is loosely based on Coriolanus. A closer comparison, both in its vicious presentation of family misfortunes and its handheld, fly-on-the-wall stylings, is Thomas Vinterberg’s Festen, but it also feels like the Modern Toss cartoons come to life — apt, as Wheatley directed some of the strip’s Channel 4 transition.

Above all, though, it is pure, uncut Wheatley — biting, bitter, irreverent and funny.

After 2016’s Boston-set Free Fire, this is resolutely British, snide and direct from Dorset, where people smile sympathetically before cursing under their breath, sarcasm is endemic, and resentment uncontained. Fleeting remarks or looks speak to years of disgust. Colin asks someone to check into non-regulation steps after his self-pitying mother trips over and makes a meal of it. Someone says, “F*** you,” to a fusebox.

It is all horribly resonant: the petty jealousies sting, while the long-running feuds, manifested in barely repressed hatred, are painful. Wheatley goes big on the small things. There is talk of fiefdom and misdeeds, more than one reference to the country pile as a castle and, thanks to Clint Mansell’s score, full of flutes (always scary), it does feel like medieval power-play.

The film was written by Wheatley, with contributions — presumably improvisation — from the cast, sometimes obviously. There is a sense that he devised this as a means, in-between bigger projects, to hang out with some of his favourite actors, have a laugh, and just let them go at it for a couple of weeks. That works in its favour, though — there is a fluidity to the film, and it always feels alive. These are snatches rather than scenes, giving it all a montage feel. Every performance is idiosyncratic, with one-liners too good to spoil here.

It loses steam a little: the explosions are underwhelming, and the film never quite climaxes, possibly because it’s been letting rip from the start, but also because Wheatley presumably didn’t want to shoehorn in any overwhelming plot device. And that’s no bad thing. The film is contrivance free, as it is sentimentality. Yet for all its sniping, there is heart here. Somewhere.

A slight but consistently entertaining, thoroughly funny slice of life, this is Ben Wheatley untethered, letting off steam with a workout. It is a welcome carnival of misanthropy.